The living legend himself, ERIC CLAPTON, releases a select handful of early 2017 Tour Dates :
Wow it’s been quite a while since we’ve heard from Eric Clapton. For those of you that are too young to know, Eric Clapton is seriously one the the greatest guitarists to ever grace us with his presence. Eric Clapton was miles above most everyone else in rock music during the 60s, 70s, and beyond. His music and guitar playing style has influenced millions of other musicians, and they’d be the first to admit it. From being in bands such as Cream, The Yardbirds, Derek and the Dominos, Blind Faith and several more, including his solo work, Eric Clapton has an endless number of smash hit songs that almost every one knows. Songs that many are familiar with include Layla, Tears In Heaven, Wonderful Tonight, Cocaine, I Shot The Sheriff, White Room, Let It Rain, Little Wing, Bell Bottom Blues and the list just goes on and on.

This 2017 year we are in or a special treat because Eric Clapton has announced a very small, intimate (only in size, the venues are huge) ‘concert tour’ that will be visiting New York, California and London (United Kingdom). Hopefully there will be more dates and venues added, but I guess we’ll have to wait and see.

Look below for the latest list of Official Eric Clapton tour dates, you can also look for tickets, and watch some cool music videos. 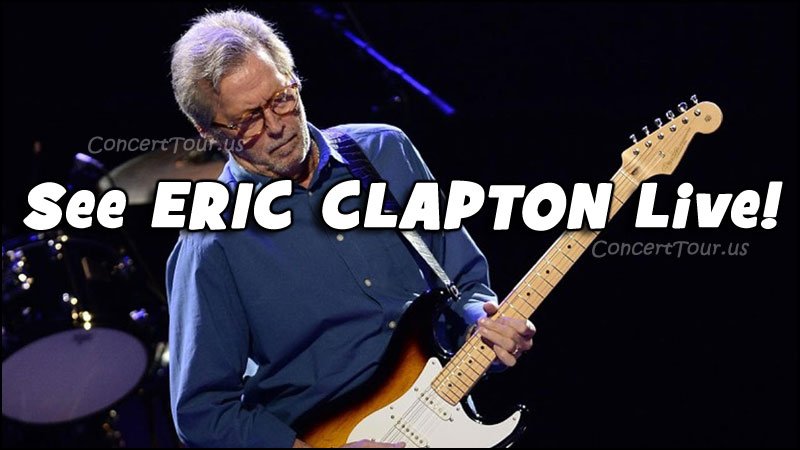 Don’t miss what could be one of your last chances to see Eric Clapton perform live in concert!!

Check back often to see if Eric Clapton adds any more tour dates for the 2017 year.

Eric Clapton – Tears In Heaven (Official Video)
“Tears in Heaven” is a ballad written by Eric Clapton and Will Jennings about the pain Clapton felt following the death of his four-year-old son, Conor, who fell from a window of the 53rd-floor New York apartment of his mother’s friend, on March 20, 1991. Clapton, who arrived at the apartment shortly after the accident, was visibly distraught for months afterwards. This song is one of Clapton’s most successful, reaching #2 on the Billboard Hot 100 singles chart in the U.S. The song also spent three weeks at #1 on the American adult contemporary chart in 1992.


Eric Clapton – Blues Favorites – 1994, 1995 (Live!)
“Here are 9 songs from the Nothing But the Blues performance at the Fillmore, and the rehearsals for From the Cradle. I selected my favorites which, it turns out, are all very similar in form and pace.”