Ashley Nicolette Frangipane, who is better known in the music industry as Halsey, is a singer and songwriter that comes from the United States of America. She was born in Edison, New Jersey on September 29th in 1994, which would make her 25 years old at the time of writing this (wow I feel old!). Halsey has an amazing voice, and began her professional music career back in 2014. Her debut album was released in 2015, and it was named ‘Badlands‘. The album, and four of its singles all went certified platinum. She released her second album, ‘Hopeless Fountain Kingdom‘, in 2017. That 2nd album got a lot more airplay than the first. It was definitely more ‘radio friendly’ then her first album. If you listen to the two, you’ll see why (language, sexual innuendos). She has her third album coming out this year, it’s called ‘MANIC‘ and a second single from it has already been released. You can catch the music video for that song, ‘You Should Be Sad‘, further down on this very page. Some of the cities she’ll be performing in include Morrison Colorado, Irvine California, Salt Lake City, Columbia Maryland, Holmdel New Jersey, Nashville, Forest Hills New York, Mansfield (Boston), Saint Paul, Atlanta, Kansas City and more. There’s even a single stop up in Toronto, Ontario Canada.

Not only will you find the music video for ‘You Should Be Sad’ below, but you’ll also find the latest list of official Halsey tour dates, and links to look for tickets. 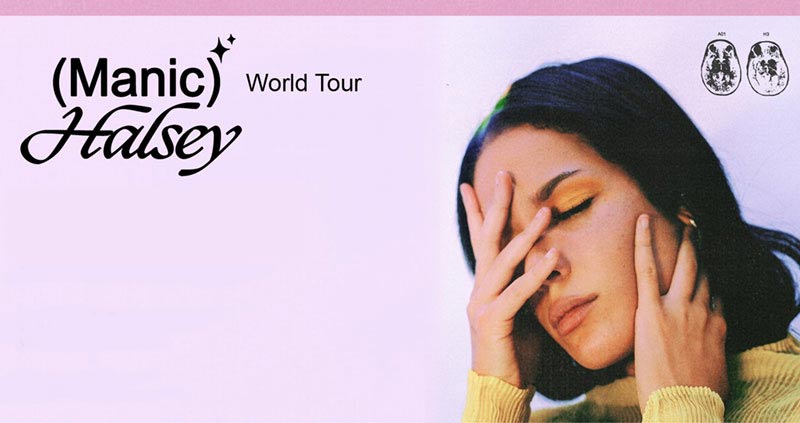 Singer Halsey will be on North American leg of her Manic World Tour starting in June of 2020. Watch her perform hits like You Should Be Sad and Without Me live on stage!

Check back often to see if Halsey extends this North American leg of her 2020 Manic World Tour. Sometimes, Entertainers add dates without much notice to the public at all. We’ll keep the above event lists updated as new dates and shows are announced.

Music Video – Halsey – You Should Be Sad