I know, I was quite blown away too when I heard the news that Kenny Rogers was back on the music scene and actually has planned out somewhat of a large concert tour known as The Gambler’s Last Deal Tour. The Kenny Rogers tour spans from mid-September 2016 and even into 2017. At first he’ll be on the road with Linda Davis, and then it appears as if he’ll be performing alone towards the end of his trek. Who knows though, his shows should be quite popular so he could bring out just about any surprise guest.

Kenny Rogers is famous for plenty of reasons, but much of it began with is music. He’s known for hugely popular songs such as Lady, We’ve Got Tonight (duet w/ Sheena Easton), The Gambler, You Decorated My Life, Islands In The Stream (duet w/ Dolly Parton), Lucille, Coward of the County, Don’t Fall In Love With A Dreamer, Through The Years, She Believes In Me, along with many, many others. He’s had a tremendous music career, and while being categorized under ‘country music’, he’s released songs that spanned genres. He’s gathered a very large fan base because of his incredible song library.

Don’t miss out on a great show and try to catch one of the upcoming Kenny Rogers concerts. Look below for the latest list of Official Kenny Rogers tour dates, links to look for tickets, along with some great music videos of his. 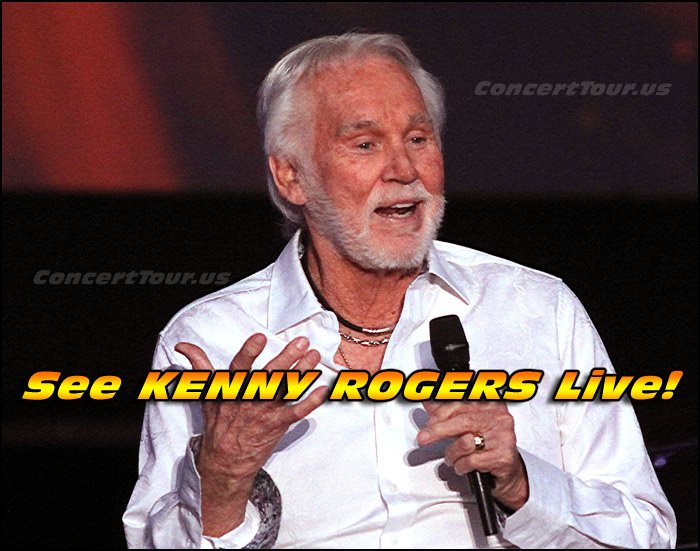 It’s been a while for Kenny Rogers since he’s been on the road. Don’t miss your chance to see him live!

Check back often to see if Kenny Rogers adds any more dates to his present concert trek.

Kenny Rogers — Lady – Lyrics :
Lady, I’m your knight in shining armor and I love you
You have made me what I am and I am yours
My love, there’s so many ways I want to say I love you
Let me hold you in my arms forever more

You have gone and made me such a fool
I’m so lost in your love
And oh, we belong together
Won’t you believe in my song

Lady, for so many years I thought I’d never find you
You have come into my life and made me whole
Forever let me wake to see you each and every morning
Let me hear you whisper softly in my ear

In my eyes I see no one else but you
There’s no other love like our love
And yes, oh yes, I’ll always want you near me
I’ve waited for you for so long

Lady, your love’s the only love I need
And beside me is where I want you to be
‘Cause, my love, there’s somethin’ I want you to know
You’re the love of my life, you’re my lady