Modest Mouse Plans Out There 2016 Concert Tour Plans, Fans Overly Excited :
Alternative Rock band MODEST MOUSE will be on tour this 2016 year, bringing with them the band BRAND NEW to open for most of the shows. Last year in March, Modest Mouse put out there latest studio album called ‘Strangers To Ourselves‘, which happens to be their 6th album. The main personnel on that album is Isaac Brock (who wrote most of the lyrics), Jeremiah Green, Tome Peloso, Jim Fairchild, Russell Higbee, Lisa Molinaro and a whole addition instrumental group. The album reached the #3 spot on the Billboard Music Charts in the U.S.

The Modest Mouse tour so far looks to be made up of about twenty five shows and will be performing in states such as New York, Louisiana, Alabama, Utah, Colorado, Kansas, Illinois, Pennsylvania, Michigan, North Carolina, Florida, Georgia, Maryland, Massachusetts, Pennsylvania, California, Washington, Arizona, Texas, Oklahoma, Oregon, Tennessee and hopefully more. If they happen to not add any additional shows, you may want to prepare yourself to travel a bit if you really want to see Modest Mouse in concert that bad.

Check below for the latest official list of Modest Mouse tour dates, links to look for tickets, plus watch some cool music videos by the band. We hope to see you at one of the shows!

Check back often to see if Modest Mouse adds any more tour dates to their existing concert schedule.

MUSIC VIDEO – Modest Mouse – The Ground Walks, with Time in a Box 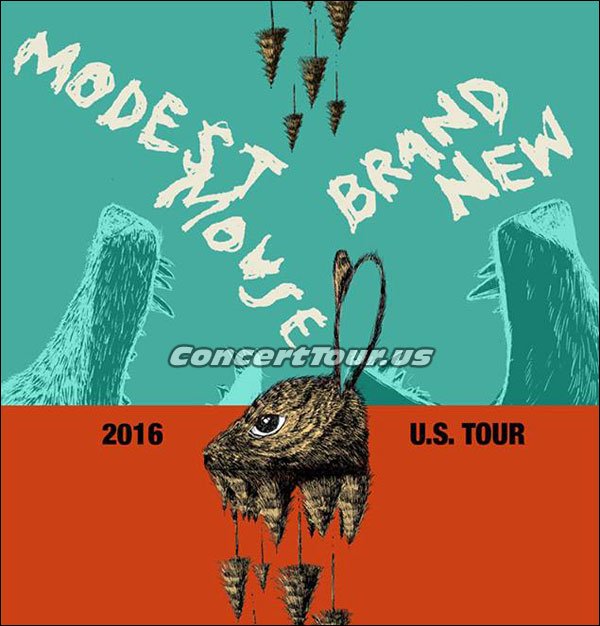 Fans are so excited to see MODEST MOUSE in concert this 2016 year. They’re on tour with BRAND NEW and their concerts will be awesome.