Rage Against The Machine 2022 Tour Dates

*See New Rescheduled 2022 Dates Below* …. We knew this day was coming, but it still excites you when it happens. Rumors of a reunion tour of a band you love comes true. That’s exactly what just happened with Rage Against The Machine. The band was recently talking about a reunion late last year but only had a few appearances at random global music festivals planned. Until now that is. Now come a load of North American tour dates from Rage Against The Machine, plus more global dates, known as the Public Service Announcement Tour. Joining the band on the tour will be supporting act Run The Jewels. The band’s North American leg of the tour is set to begin on March 26th at the Don Haskins Center in El Paso Texas. The band is set to also perform in Las Cruces, Glendale, Oakland, Portland, Tacoma, Minneapolis, Kansas City, Saint Louis, Chicago, Boston, Dover, Detroit, Pittsburgh, Cleveland, New York and way more. Included are a handful of stops up in Canada. Their full tour list can be found below. Tickets go on sale to the general pubic on February 13th, but keep an eye out for any pre sales which will give you early access. 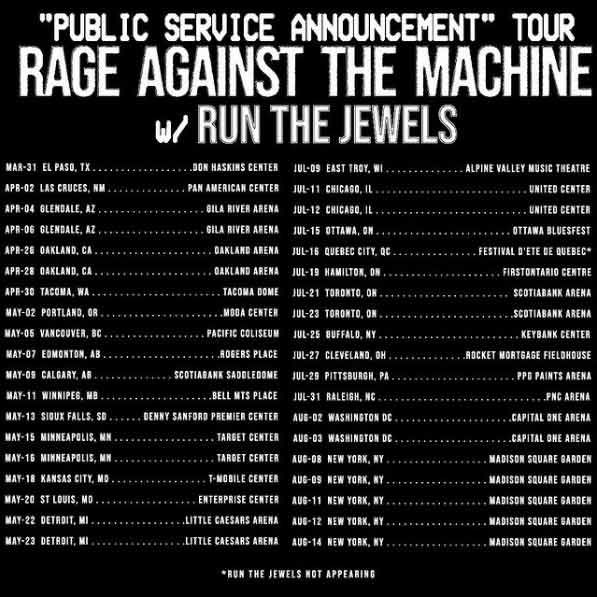 The Rage Against The Machine tour will now start in the spring of 2022.

The above list is the latest dates we’ve heard announced by the band. Check back often to see if Rage Against The Machine adds shows and extends their tour. We’ll keep the above event lists updated as soon as new shows are released.

Rage Against The Machine Music Video Playlist (Over 50 Songs!!)


Written and Posted by Holly Tisdale