Rob Thomas of Matchbox Twenty Yet To Announce His 2016 Tour Plans :
Almost everyone was a fan of the band Matchbox Twenty at some point or another. Whether you knew it or not, they had many songs which were popular among many people, but for some reason they never realized it was Matchbox Twenty. Rob Thomas was the main song-writer and singer for the band, which enjoyed huge success. They put out hit songs like Unwell, If You’re Gone, How Far We’ve Come, 3AM, Bright Lights, Bent, Push and several more. Rob Thomas himself has solo hit songs such as Her Diamonds, Lonely No More, Fire On The Mountain, Fallin’ To Pieces, Smooth (w/ Carlos Santana), Ever The Same and Wonderful.

Matchbox Twenty was around as a band for quite a while. They formed back in 1996 and split up a couple of times over the years which is when Rob Thomas got his feet wet as a solo writer and performer. When the band is not together, Thomas is always off doing his own thing. His own popularity grew exponentially and he was already proven from when he fronted Matchbox Twenty (some people write their band name our as Matchbox 20, but in reality, the number is spelled out as Twenty). The band is made up of Rob Thomas, Brian Yale, Paul Doucette and Kyle Cook. However, when Rob Thomas hits the road solo, he brings his own backing band. Sometimes he also brings some very special guests up on stage with him during a show, so keep an eye out, you never know who he will perform with.

Below you will find the latest list of Rob Thomas tour dates, links to look for tickets to his concerts and some random music videos of Rob Thomas live in action. He actually sounds great live and his shows sometimes become like a huge sing-along because so many of his fans sing along with him.

Check back often to see if Rob Thomas adds more dates to his concert schedule. We certainly hope that he does. 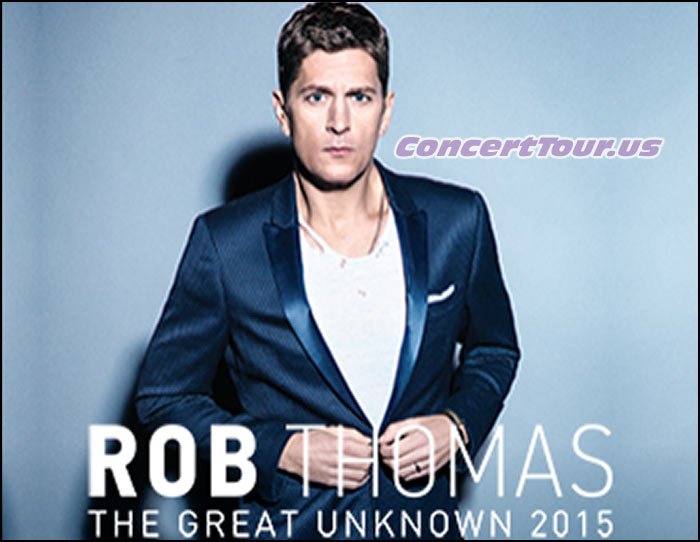 Rob Thomas of Matchbox Twenty is going on the last leg of his Great Unknown World Tour!

Since it appears that Rob Thomas does not have that many shows on his present tour, making it all the harder to go see him. Fans will either have to travel a bit, or hope that more venues are added to the tour itinerary. We really should hope for him to extend his tour because that will ease ticket demand and make it easier for fans to obtain tickets.