Crooner Rod Stewart and 80’s rock / pop band Cheap Trick just dropped some great news. They’re about to embark on a North American concert tour together. So far only 20 (twenty) or so dates have been announced. The trek will visit Cuyahoga Falls in Ohio, Clarkston in Michigan, Saratoga Springs in New York, Hershey Pennsylvania, Bangor Maine, Atlantic City New Jersey and more. There’s even one stop already planned out for Toronto Canada. Check out the full tour itinerary for Rod Stewart below. When it comes to song hits, Rod Stewart has plenty to choose from. You’ll definitely know songs such as Maggie May, Tonight’s The Night, You’re In My Heart, Reason To Believe, Forever Young, Young Turks, You Wear It Well, Have I Told You Lately, Hot Legs, and so many more. You should definitely be familiar with Cheap Trick due to songs of theirs like ‘I Want You To Want Me’, ‘Dream Police’ and ‘Surrender’. The last time Cheap Trick toured was with the band Poison back in 2018 on Poison’s “Nothin’ But A Good Time Tour”.

Continue on below to see the full list of Official Rod Stewart tour dates. You’ll also find links to look for tickets, plus a great music video playlist of Rod Stewart songs to listen to. 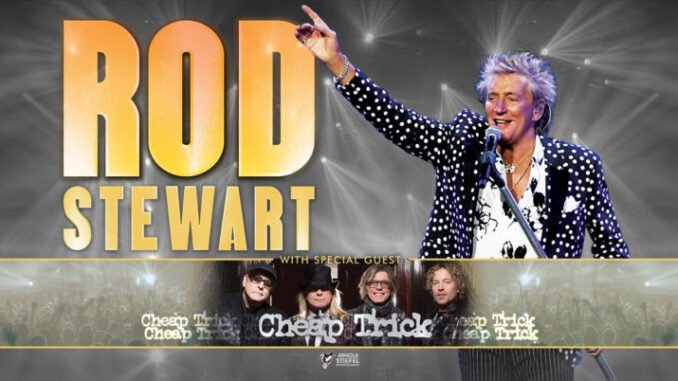 Check back often to see if Rod Stewart adds more dates. We’ll list them here whether he’s with Cheap Trick or not.