ZZ Top & Gov’t Mule Announce Small Co-Tour for this year! :
Topping the charts this year as the hottest blues & rock concerts is most likely to be the small tour of ZZ Top and Gov’t Mule. The two bands have actually announced co-tour dates with each other. The two bands will join together in September with live concert shows in New York, Pennsylvania, Maryland, North Carolina, Virginia, Illinois, and Missouri. Hopefully more states will be added to the schedule. ZZ Top’s main man Billy Gibbons shared a quote about the upcoming tour on ZZ Top’s official website: “Both ZZ Top and Gov’t Mule are cut from the same dyed-in-the blues cloth… I’ve long admired the band and Warren Haynes’ guitar work. He has a certain grit to everything he does. We’re gonna have a fine time.”

In addition to touring with ZZ Top, Gov’t Mule will also make their annual appearance at Mountain Jam. which will be held June 2-5 at the Hunter Mountain ski resort in Hunter, N.Y. Also on the performers list for the music festival are the Chris Robinson Brotherhood, Beck, Wilco and Train, who will perform Led Zeppelin‘s second album in its entirety. That should be awesome!

Check below for the latest list of Official Gov’t Mule tour dates, links to look for tickets, plus some cool music videos.

Gov’t Mule is a Southern rock jam band, formed in 1994 as a side project of The Allman Brothers Band by guitarist Warren Haynes and bassist Allen Woody. Fans often refer to Gov’t Mule simply as Mule. 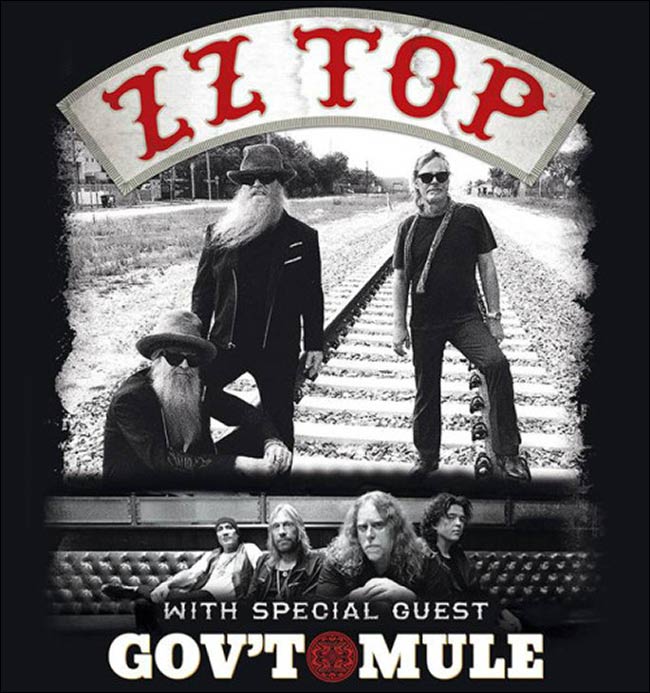 Don’t miss your chance to see an awesome live show of ZZ Top and Gov’t Mule!

Check back often to see if any more new tour dates are added to Gov’t Mule or ZZ Top tour schedule.

In related news, Gov’t Mule is just about ready to put out an archival record named ‘The Tel-Star Sessions‘, which contains never-before-released demos that the band recorded at Florida’s Tel-Star Studios back in 1994. You can get a feel of what will be included on that release by listening to a rocking cover of ZZ Top’s “Just Got Paid” the band released as the first single last week. (See videos below)